After their sell-out performances in November, this Berliner Kabarett goes to the iconic Crazy Coqs in Soho, London. Set in 1930’s war-torn Europe, it follows Jenny’s story and how she manipulates events around the men she loves and leaves
About this show –

Take a Walk on the Weill Side features both fatalistic and triumphant stories and songs created by Weill and Brecht of the various ‘Jenny’ characters….cruel, calculating, vulnerable. Classics such as Mack the Knife, Alabama Song and Pirate Jenny are brought to life and re shaped by Jenny’s friends and travelling companions, the Schadenfreude Band, a multi instrumentalist trio directed by BASCA award winner Karen MacIver. 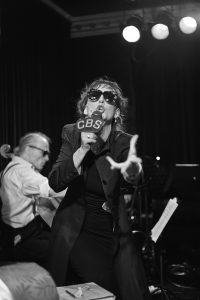 “Many singers since Lotte Lenya have covered these songs, perhaps the best recently being Ute Lemper, but in my judgement Taylor is the finest performer of them at present and deserves to be much better known.” November ’21 Hugh Kerr Edinburgh Review

“Take a Walk on the Weill is a clever and highly original concept, the ‘Schadenfreude’s’ bringing a whole new dimension to the concept of a one-woman show”  Jane Davidson M.B.E